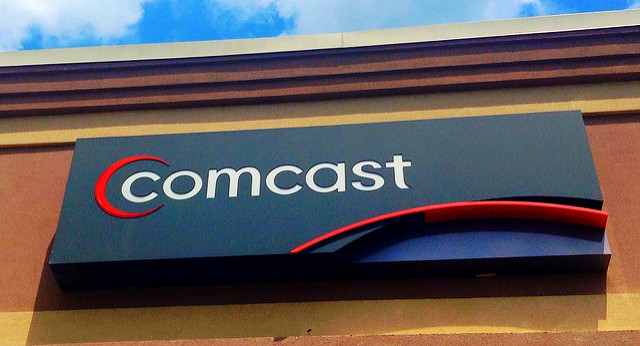 Philadelphia, PA — Comcast announced it has signed a definitive offer to acquire Domino’s Pizza for $5 Billion in an all cash deal.  “This is vertical integration at its finest.  Americans come home, order pizza and enjoy an evening watching our Triple Play bundle, and now they will enjoy our new Nonagon Play — when you order a single pizza from Domino’s, you’ll automatically get a Pizza, Chicken Wings and a soda, because our customers absolutely love our bundles” said D’Arcy Rudnay, Senior Vice President and Communications Officer.

“Americans love getting outsized value for their dollar, and our Nonagon play, referring to our Triple Play Cable Bundle and our new Triple Play Domino’s Bundle, means that they get exactly what they want — entertainment as well as food without having to leave the couch.”

Domino’s will no longer offer single pizza orders, even for non-Comcast cable subscribers, as Comcast expands its bundling philosophy into adjacent markets.  “Our research shows that even in areas where Comcast does not offer service that customers of our competition have the same preferences, so it only makes sense that we would extend the expanded choice of bundling into these markets.”

Reaction from consumers was universally negative.  Hundreds of comments such as “I don’t want chicken wings or soda, I just want a damn pizza!” flooded the Comcast support page almost as soon as the announcement was made.  Comcast spokespersons immediately began offering rebuttals, but after it was clear that they could not keep up with the public sentiment, comments started disappearing from the site.

Comcast has announced that the Domino’s Triple Play bundle is set to go up by 15% by next month, so hurry to enjoy the savings now!

Charter Communications quickly announced that they were exploring the purchase of Papa John’s and that they totally had this idea way before Comcast did.