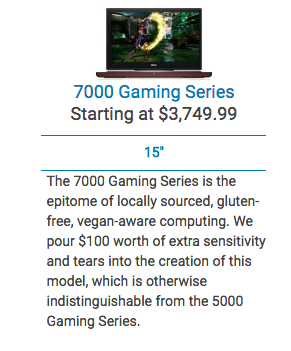 Frances Jamison, Product Line Manager of the Artisan line, described his inspiration at the kick-off:

“I was out to dinner with some friends recently at a very nice steak place, when I noticed on the menu that every steak was marked with a gluten-free symbol.  At the end of the evening, I called the manager over and asked why in the world they would mark steak as gluten-free.  He told me that after they labelled the steaks gluten-free that their sales went up by 25%.  25%!  And that’s when I realized the depth of stupidity of the average consumer.  The next day, the Artisan was born.” The Artisan line appeals to the extreme snob/hipster demographic.  Typically over-educated with copious disposable income, this group wants their purchases to be unique from the crowd.  They crave to be the first to discover new trends or to rediscover old trends to make fashionable again.  The Artisan line reaches all of those desires at once.  A fantastically over-priced machine with retro technology (the Motorola 68000 processor debuted in 1979), the Artisan 3000 is a throwback to a simpler time of computing.  It’s so slow, yet so expensive.  Our test market said that the machine caused them to have time to contemplate existential issues while waiting for Gmail to load.  Some even said that it brought them closer to Enlightenment with the extra time they had now that they had to wait for even the simplest tasks to load.  They found it very freeing, and well worth the $1,979.99 they paid for it.

We also discovered during market research that as long as something is marked as “locally sourced”, “artisanal” or “vegan-aware” you could jack the price up to fantastic levels.  However, we discovered that “gluten-free” is the gateway drug that draws the eye of the most consumers out there.  People are now so used to looking for at at the grocery store or on menus that the eye longs to see it in any format it can consume.  in trial runs, we had people who literally bought a computer 20 minutes earlier return that one just so that they could order the much more expensive gluten-free version.

Inexplicably, the majority of consumers polled by the Brewblog almost clawed their way out of their chairs to purchase one of these unnecessary money vampires.

Chuck Scarborough of South Austin, after regaining control of himself, asked for a tissue.  He then went on to say, “Dell is one of the greatest innovators on the planet.  They’ve been down for a while, but with this they are BACK!  I can’t tell you how long I’ve wanted a gluten-free computing experience!”.  When asked if he had celiac disease, Chuck blankly looked at the reporter and asked what that was.

Other consumers displayed the same sheep-like reaction.  Some indicated that this was a fantastic complement to their diet.

No animals were harmed in the creating of this article.  Human livers were severely put to the test after dealing with the public.

Man Successfully Gets Every Item On Shopping List Right