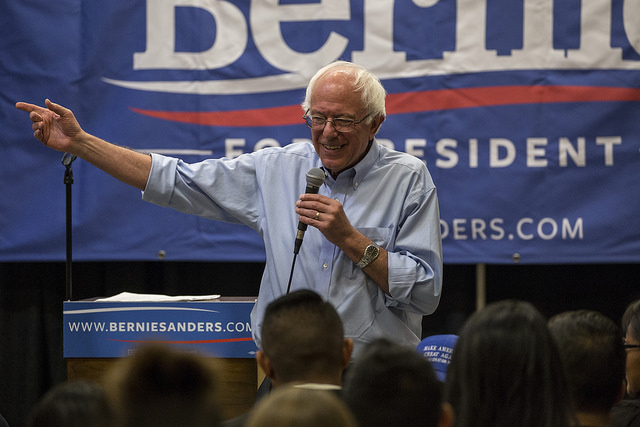 New York, NY — Hillary Clinton, surrounded by her campaign advisors and donors, strode forth from her campaign headquarters after her recent primary victories and issued forth a challenge to any would-be Democratic presidential nominees.

“Why do you come out and line up for battle?  Am I not Hillary, and are you not the servants of the Democratic Party?  Choose a man and have him come down to me.  If he is able to beat my delegate count, we will become your supporters; but if I overcome him, you will become our supporters and serve us.”  On hearing Hillary’s words, all of the Democratic contenders were dismayed and terrified.

Bernie Sanders, in hearing of this great challenge, turned to his supporters and asked “What will be done for the man who defeats this woman and removes this disgrace from the Democratic Party?”  His supporters informed him that any man who would defeat her would face The Donald for control of the country.

On hearing this, Bernie approached the Democratic Party Chair, Debbie Wasserman, and said “Let no one lose heart on account of this woman; your servant will go fight her.”

Washerman replied, “You are not able to go out against this woman and fight her; you are only an upstart Democratic Socialist, bereft of large donors and the support of the Establishment, and she has been their favored from her youth.”

But Bernie said to Wasserman, “Your servant has been rallying the masses; collecting votes from the disenfranchised and earning an equal war chest from many small donors instead of but few large.  Your servant has defeated this woman in many surprising contests before.  My supporters have delivered me from her before and they will deliver me from her hand again.”

So Sanders grabbed his slingshot, and stood forth to face Hillary and her advisors.